﻿Visiting Goa in the Monsoons – Yes or No?

It all started with me spotting a photo shared by a friend on Facebook. This was a photo of her taking a trek through the Valley of Flowers. Upon doing brief research, I realized that the trek was organized by IndiaHikes. This was when I wanted to take my first trek. When I called up IndiaHikes, I was informed that the Valley of Flowers might not be the best trek for a first timer looking for the real camping experience as it consists of staying in lodges.

I then created a Facebook inviting some of my best friend to go along, 2 committed without asking a question. Next moment, I had booked the Deoriatal — Chandrashila Peak Trek. Booked our tickets, planned a brief stay at New Delhi and within days, we were all set. It was time to buy stuff for the trek, thank goodness for the very detailed information provided by Indiahikes as well as the endless plethora of information available across the web. I even ended up writing an article on my blog titled Preparing for your first Hike.

I was to travel 2500 KMS before I reached base camp. My first goal was to reach Sari in the Indian state of Uttarakhand from Guntur, Andhra Pradesh. We took the flight to New Delhi, then the Nanda Devi, an overnight train to Haridwar.

The drive from Haridwar to Sari was one filled with sudden curves and bends, filled with gorges and drops of hundreds of feet, it was a memorable 9 hour journey. Hukum Singh who handled our vehicle was a master and we felt safe every moment. We made several stops to photograph as well as got closer to nature for brief moments.

Later on we got off the road and went for a walk into the shallow waters of the flowing Alaknanda river. The road that takes us to Sari is one that follows the Alaknanda all the way and it would have been a crime not to get up close with the Ganges. Hukum Sing our driver couldn’t have picked a better location to stop. This place was so clean that we did not use any footwear, we could walk bare feet, we indulged ourselves here and then continued our journey.

For food, we had first stopped in Rishikesh for a some of the freshest cheese(Paneer) I ever had, then we stopped at Hotel Shiva Ganga for some scrumptious breakfast. We had 5 dishes for lunch which were all well prepared at Rudraprayag at a placed called Hotel Vijay Raj.

We reached Sari around 6 in the evening, the welcome was something that we did not expect. The Trek leader Ankit and his support staff were at the entrance where we get off our vehicle to greet us and show us our room. This was nice gesture, especially when you have travelled into an unknown place and might feel slightly insecure or unsure, this welcome made us feel totally in the right hands and safe.

We had briefing, medical checkups and dinner at base camp. The briefing and checkups were so organised that we were already beginning to form a very positive opinion about the organisers of the Trek.

We had a good nights sleep at Sari.

Ankit is extremely experienced and a very organised person. He had many superpowers, but the most striking one was his ability to remember all 30 trekkers names right from day 1. His instructions had been very clear and as a result of that, we were ready to start the second day of our trek on time as planned.

Today was not going to be tough, it was a short trek but a beautiful one. We caught first glimpses of snowcapped mountains and were totally awed and over whelmed at how majestic they looked in real sight.

With Ankith our trek leader being omni present to give us commentary about where we were, what we were looking at and the story behind it, it was very information and interesting. We were just not strolling through nature but were also learning about the significance of places.

As there was most part of the day left, we indulged in some sport. We played frisbee for a while, then some bonding exercises to better know each other in the group and the day ended with Mahesh expertly explaining the mythology behind the lake and other mountain caps around us.

The provided gear which comprised of a tent and the sleeping bag amongst others were all of top quality and the level of service being rendered under the circumstances was 5 star.

Early in the morning, it was all about Sunrise and photography at the beautiful Deoriatal.

We reached Rohini Bugyal close to 4 and had a good rest. There was a lot to explore. We even managed to play some cricket. 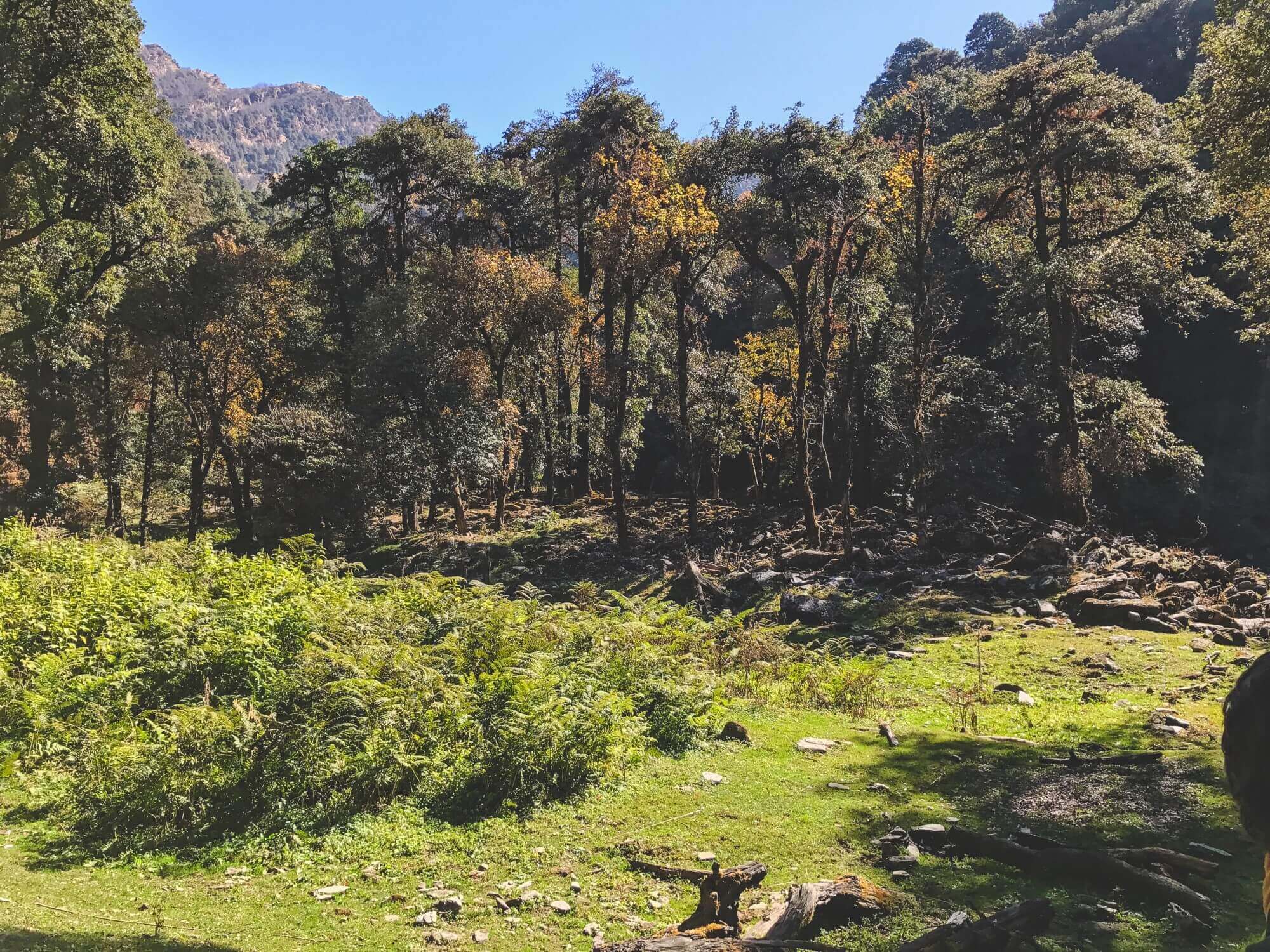 Today was not a very long walk but we were well aware that we would be sumitting the 12000 feet Chandrashila the next day. We arrived at the Bhrujgali campsite quite early in the day. The path to Chopta and Tungnath was right beside our campsite. The next morning, we would be trekking to Chandrashila peak via Tungnath.

It was an early trek today. By now, we found our head lamps to be indispensable and today, they played the role of a hero. The trek to Chandrashila is taxing on the body. While there is a well laid out track with stone till Tungnath, it is steep and the climb during the early part of the day was a difficult one. Once we reached Tungnath and the light started shifting the darkness around us to something majestic, it is then that we realised what we had achieved and where we were. Granted the path from Tungnath to Chandrashila is extremely hard and there is no laid stone path here, however, with the ever watchful Ankith and the rest of the Indiahikes crew near us and guiding us every single step of the way, we did not feel lost or scared or worried. All we had to do was to push ourselves that little bit to reach the summit. 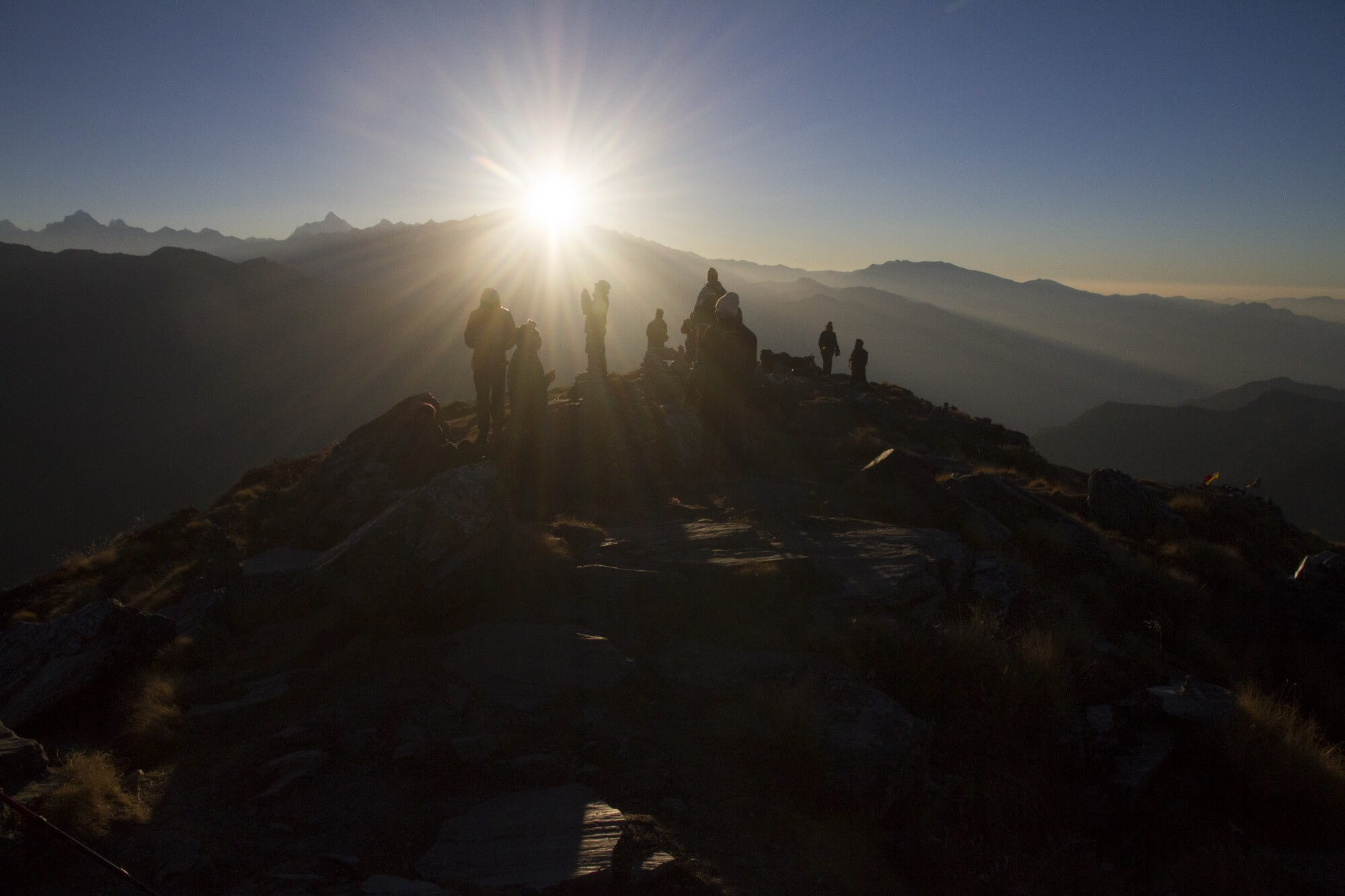 We finally did it! We reached Chandrashila, it was 12,000 feet that we conquered and every step was worth it. Everywhere we saw, we saw something that seemed new to us, something that awed us. 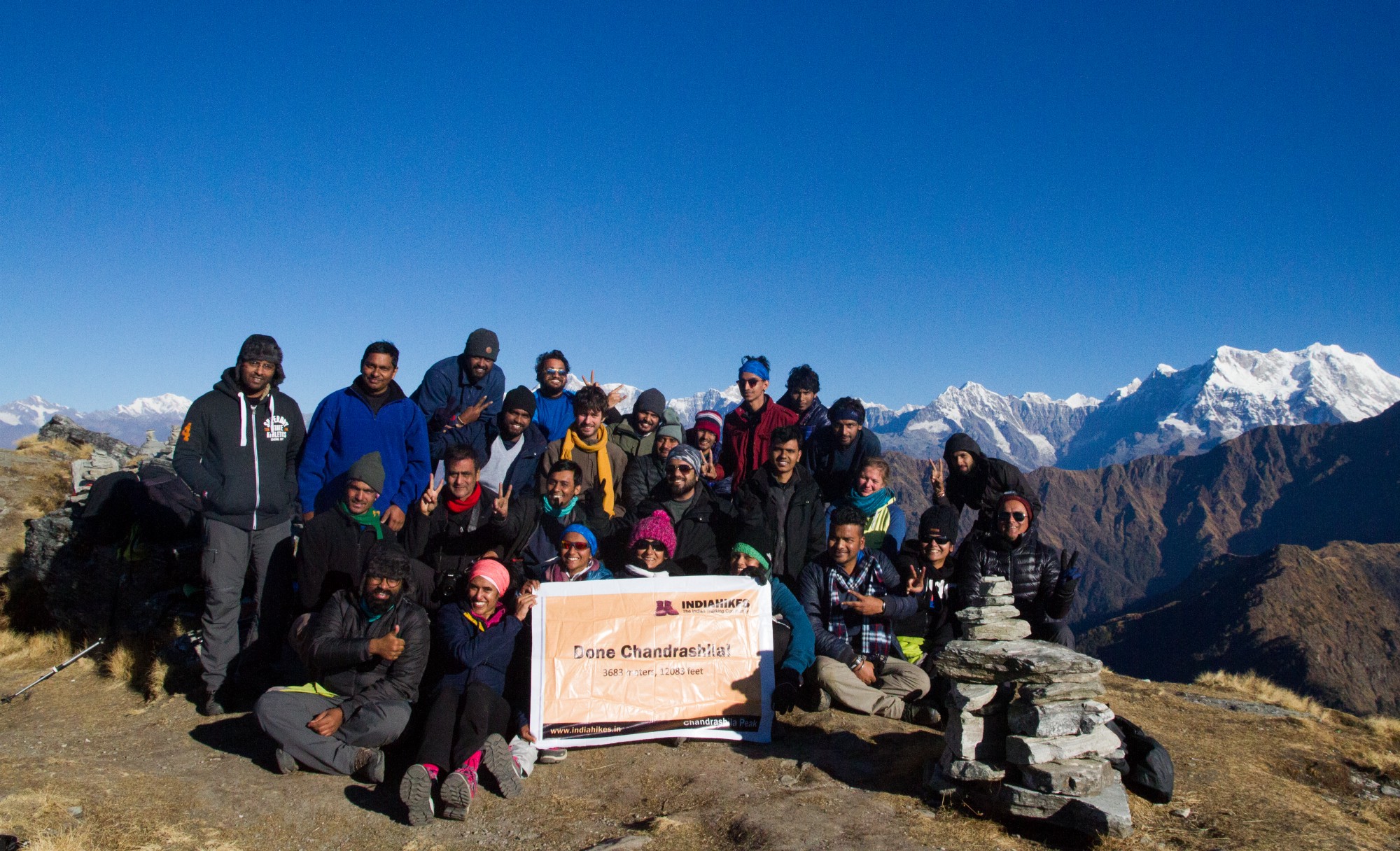 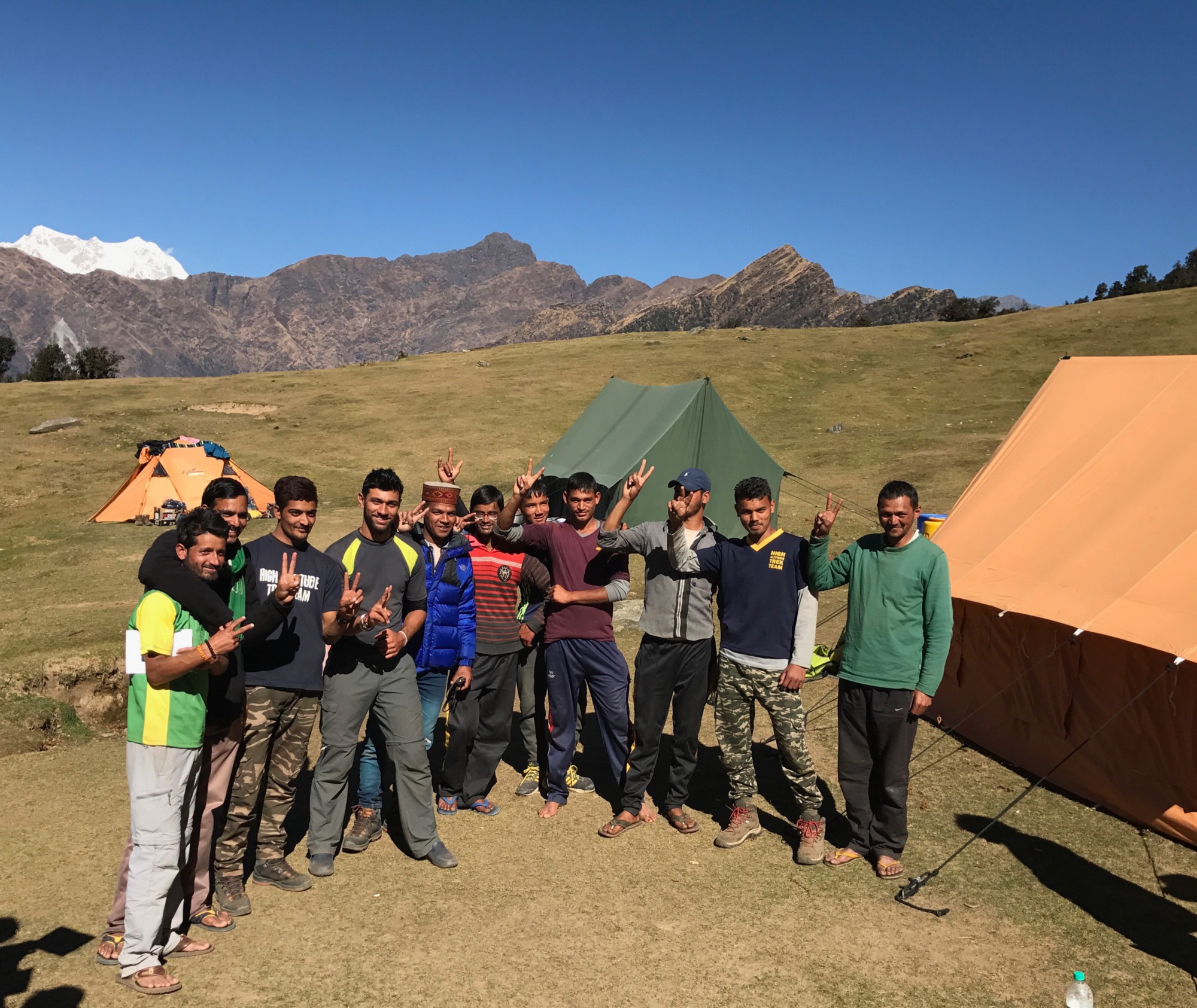 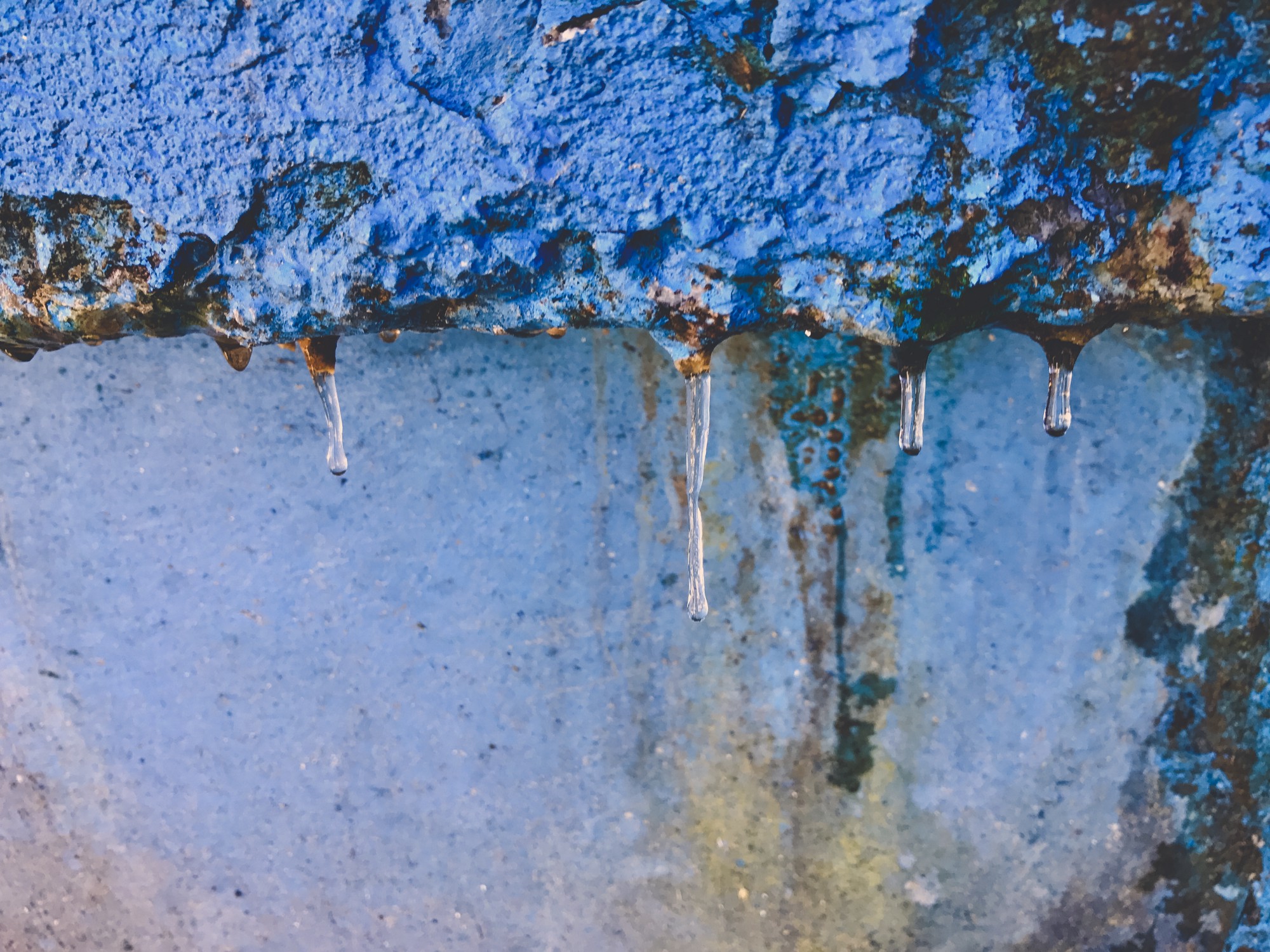 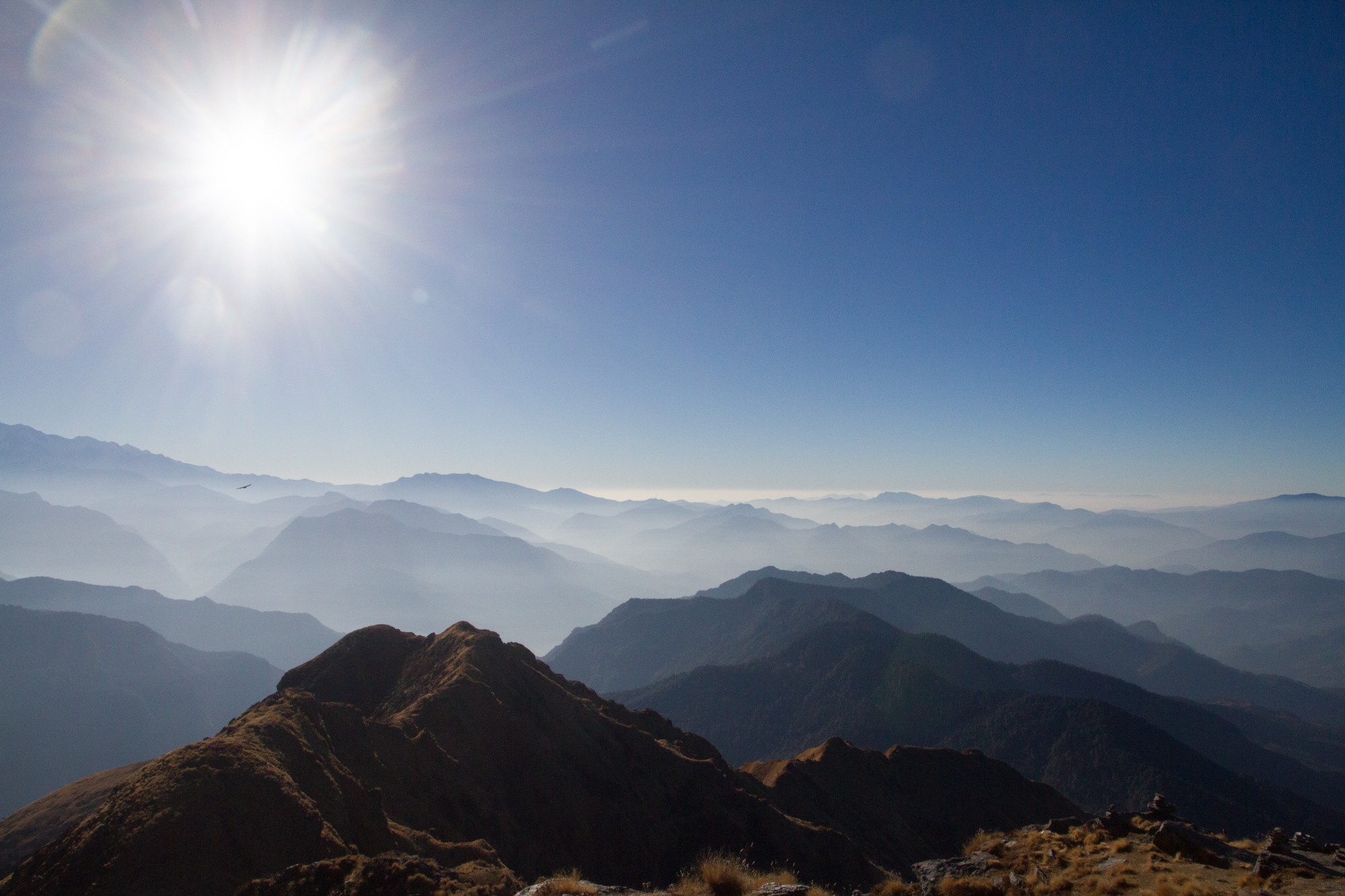 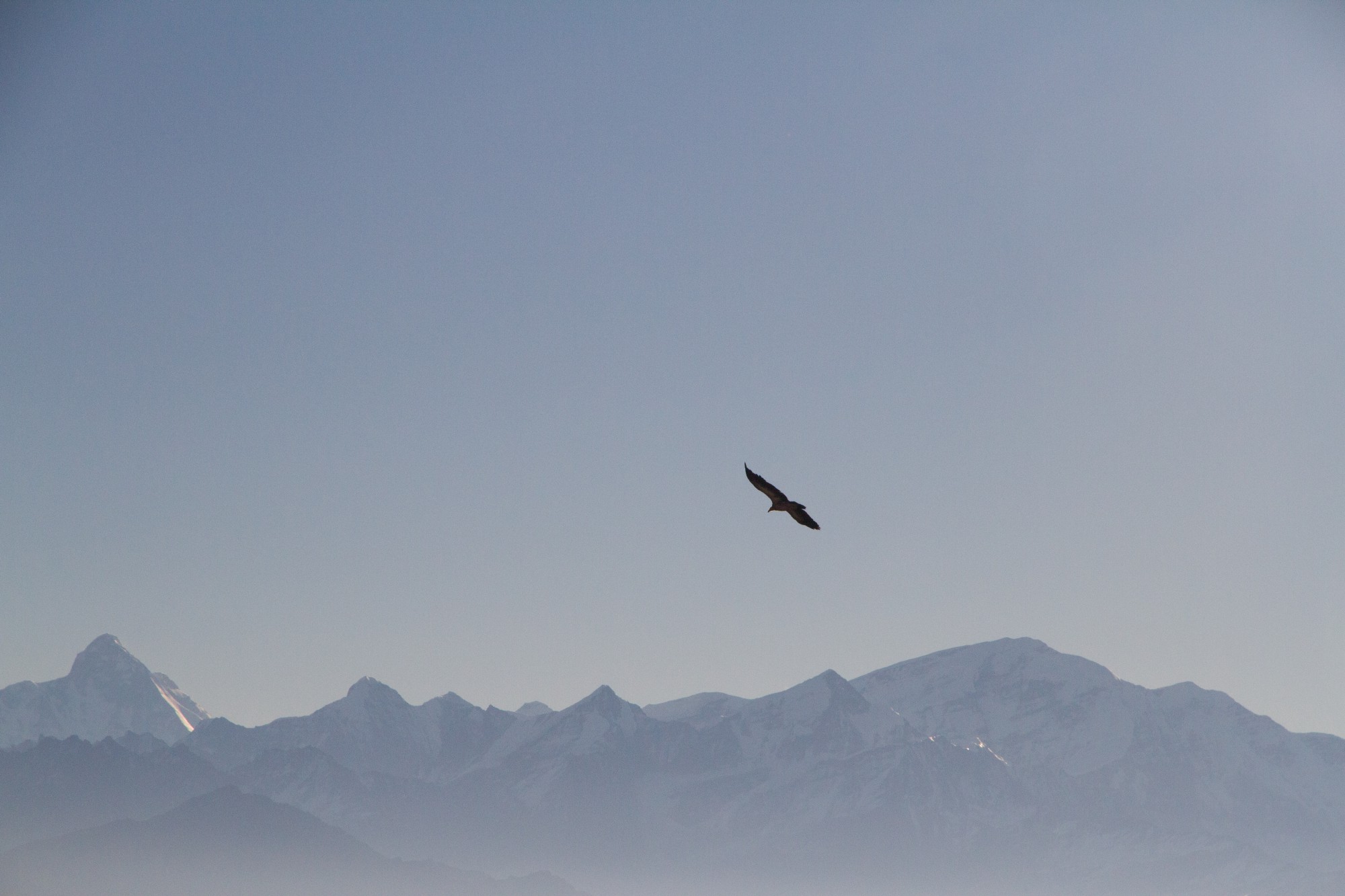 We had the most memorable 4 days of our life. Although there was another day of trek left, we chose to spend the extra day at Haridwar. So, once we reached the Bhrujgali campsite, we walked to Chopta and took the vehicle to reach Haridwar at around 9 in the night.

I have to thanks Ankit Naithani and Indiahikes for this excellently organised trek. I would recommend others to trek with them. We have already decided to trek with them in 2017, which trek we will take up remains to be seen.