The Most Beautiful Shots In Movie History

Over the past few years, mobile access has become a part of life. It is very similar to getting water, electricity and other essentials in daily life. I was using Vodafone earlier but as Vodafone failed to provide proper signal coverage, I shifted to Airtel My family plan with 4 of my sims from various networks.

As soon as I ported, one of my phones would still show Vodafone in the network logo area and would not receive incoming calls. I went to the showroom. After a bit of fiddling around with settings and changing the sim, it seemed to work.

Since then, I was able to use Airtel for a few months without a problem.

Suddenly out of nowhere, I was not able to receive any incoming calls on 3 of my 4 numbers and data also was not accessible.

It was a while before I realized I was not receiving any calls or text messages. Once someone pointed out, it was a nightmare not knowing who was contacting me and what business I was losing as my phone number is also a business number and leads get generated from advertisements we give out.

I went to the Airtel store where I had taken the plan. The chaps are normally very helpful there, however, it seems there is no management and they are mostly left to tend to huge rushes of people without any particular delegation and supervision. There was a lethargic trainee, who fiddles around with my phone. Then he tried calling it and accessing data but when everything failed, he issued me a sim card. The sim card got activated but there was no improvement of the issue.

I went into the Airtel store again and informed the same trainee that the changing of sim did not work. He proceeded to raise a complaint on a phone where he wrote not able to make or receive calls since 10 days. When I tried correcting him that it was only 2 days since the issue, he just said, action will be swift. I left the store in the hope this will be fixed.

This was my third visit and this time I was really frustrated. Things did improve and I was receiving random incoming calls but there was absolutely no data. And this was only on one of my phones, the other two numbers still didi not receive calls or data. The same trainee was like, let me raise another complaint and he started typing on his phone. I was like, what the hell, can you just call your store manager. Another agent, Krishna, who is very composed and the same person who resolved the phone signal issue the first time around attended me. He fiddled around with the phone settings, called my phone but no use. He then realised that if I turned off the data, I was receiving incoming calls.

He asked me to leave the data off for an hour or so and then turn it back on so everything will be resolved. Remember till now my wife’s phone and my second phone are still not receiving incoming calls.

He also raises a complaint once again on this day and promises someone will visit me at home to check signal strength and also rectify the issue with all my numbers. No one turns up that day.

I am really upset and send a tweet to Airtel India They too want further details and they too open up a complaint.

I get a call from my local Airtel Store guy Krishna, asking me if the issue is resolved. I inform him that I am receiving incoming calls but data is not yet accessible. He acknowledged and informed me that someone will come in the evening to address the issue. No one turns up that day.

I get a call from Airtel call centre, once again, asking me if I do not have signals at home. I inform them that it is not about the location, it is something else as I keep moving and still do not have data. They promise someone will turn up and address the issue. No one turns up that day.

My wife gets a call from the Airtel call centre asking the location of the phone and if we have signals. She handed over the phone to me, I once again explained, this is nothing to do with the location and asked her that I have been promised a visit by someone to rectify and enquired if they were coming today. She replied that today was Sunday and they will not visit. I hung up.

I also start writing this post about the issue and tweet this link to Airtel. No response, probably because it is Sunday.

Today morning, I wake up to messages from Airtel on Twitter. These messages are the same copy pasted messages I had received the last time. Anyway, I gave them my number. Last time this happened 3 days back, nothing happened. It is to be seen what happens now. 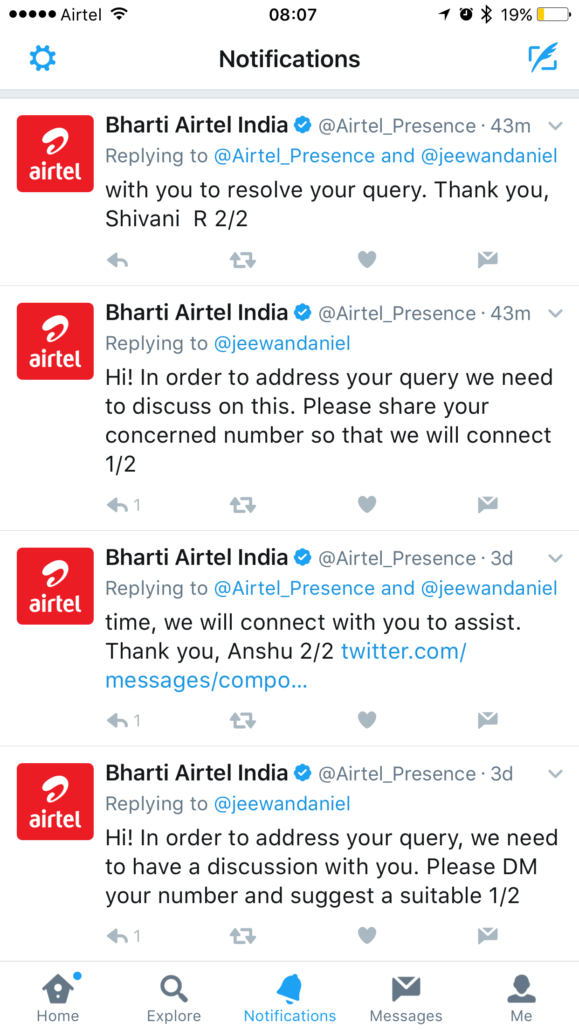 Within 20 minutes of sending Airtel Support my number on Twitter, I received a call from a customer support agent, who seemed to be organised and experience. She assured me that she will take care of the situation. Some points that came out the call were:

Received a call from the customer support agent who spoke to me earlier. She assured me once again that I will get another call today. I am not sure from whom and why. Guess they are working on resolving the issue and they will get back once they have any update. Either way, it is great that they are keeping me update.

While the reassuring call was a bit mysterious, it is beginning to get very confusing. Airtel has tweeted an update and it goes like this.

I got informed in the tweet that “one” of my numbers will be “addressed” by the 16th June. What exactly is “addressed” and when we are talking about 4 days from now, I think this is ridiculous. Considering, I have been banging on the doors of Airtel since the 4th of June, what I am being told is that a service request has been raised on the 8th day.

Service request or not, I would like to have this issue resolved at the earliest.

I received a call from the network team. Nothing came out of this call as he asked me the same questions all over again and mentioned he will escalate the issue of no data and someone will call me from some other team.

I received another call from the same person who called me. He reckons 3g/4g services are deactivated on my account and I will need to call 121 to get them activated. I explained the following: I am on a postpaid connection with an 8GB data plan and have been an active user of 3g /4g data on all my numbers. He insisted I call 121.

I called 121 and was lucky to get connected to a very efficient and courteous agent. She immediately looked up the problem and apologised as due to a technical error the data plan got mismatched and that is why I also received a message saying my data quota of 14gb has been used up by me and at that point, the services got stopped. She took a new SR and assured me that the issue will be resolved within 24 hours and I will be allotted my entire quote of 14gb as it is a technical error from their end.

I received another call from the network team, the same person who had called me earlier. I explained what I was told by the agent at 121. I requested him to not close the case and call me back in 24 hours as that is by when the agent promised my data services will resume.

As I was promised a resolution of 24 hours. I did all the troubleshooting. Toggled the flight mode, toggled the data options, removed the sim and put it back. But my data services did not resume. The problem I face is that I will start travelling today at 18:00 and data are very important to me. I called 121 and an automated system informed me that I will be updated about my existing service request on the 14th. After acknowledging that it is an error from Airtels end, they have failed to resume my services even after identifying the issue.

I called up 121 to and tried explaining the issue. The agent would once again go on about data being exhausted.  I asked him to look up the notes of the previous call I had on the 12th. He informed all systems were down and he could not look up and asked me to call back in 4 hours.

I received a call from a network engineer who wanted to visit my place and check the problem. I guided him, he was travelling from a different town.

I can a cal from Airtel resolution team and this was one of the worst calls. The lady would just go on and on about my data being exhausted and I needed to add smart bytes. I informed that I was told otherwise and also the fact that I added smartbytes already and that did not work. As if I had not spoken, she would just report the same thing.

The network engineer reached my place. He confirmed that technically everything was ok and the signal was fine. Upon further research, he found that for some reason, 3G got deactivated on my account by error, these are the same words told by the lady who acknowledged that the issue is due to a technical error on Airtel systems. He informed me he will update the needed teams about this. He asked me to switch to other plans in Airtel for some reason.

On the 14th, I left for a Holiday to Goa and I did not have the time to make notes but in short, there were several calls (10+), a network engineer visited my place, declared it was not a network problem but backed up the first customer assistants words that due to a technical glitch, my 14gb of 3g/4g data got exhausted and I had been put on a 2g plan. All over Goa, I carried a Jio dongle with me and used my phone on Wifi, not that my friend who had an Airtel prepaid phone had much luck with signals in Goa.

I ended up adding smart bytes for testing purpose and my month’s bill came to Rs. 2500+ in spite of me hardly being able to use my phone. What I found amusing for a company of this stature was that the customer service is not streamlined. For example, every day is a new day for them, new person calls, has absolutely no clue but does know that there is a problem and asks to explain and for this reason, the problem does not get the priority it needs.

It is also to be noted that before I gave it a shot on Twitter/Facebook, it was really hard for Airtel to follow up on my problem, rather, it was me who had to go around begging to fix my sim/account so I could receive calls. A nightmare, in short, the problem is now fixed but I will be slowly moving out to Jio. I did not have great expectations on Jio but it worked in the remotest places during my travels this month and I am impressed.