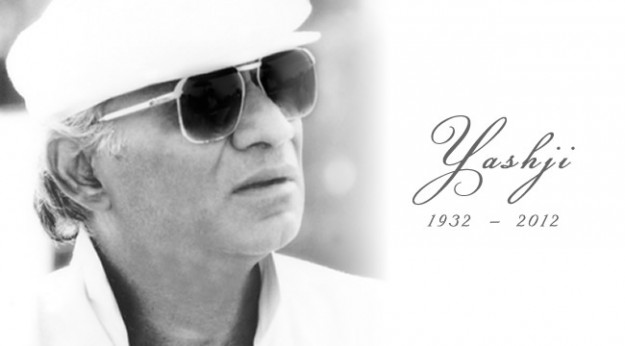 I was expecting a montage or an extended tribute for Yash Chopra at the beginning of the film. It was kept short and sweet with an iconic photograph and SRK receipting a poem written by his son Aditya Chopra.

I was there, first day, first show, to pay my tributes to the man who made me fall in love with SRK, it was when I watched Darr that I fell in love with Sharukh Khan, his portrayal of a crazy obsessive lover who made me sympathize his demise was created by none other than the man who was renowned for his love stories. It does not come as a surprise that Yash Chopra’s last four directional outings involved SRK as the leading man.

As many movie titles come and go, this movie couldn’t have been titled better. ‘Jab Tak Hai Jaan’ is all about love, love till death, eternal love, spanning decades, countries and characters. The role of Samar Anand couldn’t have been portrayed better, SRK acts as a natural, the younger Samar, an energetic, hardworking, romantic at heart hardly looks if he is 30 years old. The older Samar has aged, has a burden weighing him down, his expressive eyes always hidden under his shades. He plays the role of a troubled romantic to perfection, once again reemphasizing why he is called the king of hearts. If Raj was a character you loved, Samar is a character you won’t forget. The dialogues are long, there is melodrama, he has to carry scenes and situations that perhaps would have looked ridiculous and might have been laughed upon if not done right. Yash Chopra and SRK together walk a tight rope and both pull it off for this generation of moviegoers, just reiterating the point that these kind of romantic movies will not find a niche in this generation.

Katrina Kaif is angelic, she plays the role of Meera, a rich girl who believes strongly that Jesus gives anything she asks for but in return she will have to forego something that she likes, ironically, the entire story revolves around this issue. Meera is dashingly glamorous when she is not playing the angel, the story being set in London for most of the movie means that Katrina fits right in with the accent and histrionics.

Anoushka Sharma plays Akira and trust me, you ought to have a smile on your face whilst she shares the screen space with anyone. She is a live wire, she is like an electric eel that wriggles, jiggles and jives. She talks at the speed of light and make everyone around her love her. Apart from her histrionics, she is portrayed in an ultra glamorous role. Yash Chopra is the master when it comes to portraying his women in clothing that reveals a lot to the viewer but there isn’t any form of vulgarity present and hence, it makes easy viewing along with female friends or family.

The film has mostly been shot in London and Leh Ladakh. London has been extensively used in this film, I lived in London for 8 years and never found it as beautiful as Yash Chopra has put it on screen for me. All iconic structures have been used, the Tube, Trafalgar Square, Millineum Bride, Tower Bridge, London Bridge, Canary Wharf to name a few. Leh Ladakh is beautiful and I dream of visiting it one day.

When the music released, I did not really get into it like I got into Rockstart or Raavan. The music is the soul of the movie to say the least. The songs and the background music lift the movie to greater heights and compliment the onscreen brilliance perfectly, another pearl to add to Rahmans collection. Lyrics by Gulzar are divine and mean exactly what is being shown on the screen. All other technical departments are of the highest quality.

The story revolves around the three lead characters and is not a triangular love story. The plot transfers you effortlessly into the world of Samar, Meera and Akira. I am not a huge fan of revealing the plot or explaining the outline. This is not your typical love story and you should and must avoid this if you are a masala film fan or someone who will winch in your seat when there a a few slow moments, of which there are plenty.

Yash Chopra has given the viewers many memorable films, a few I remember in the recent past are Dil to Pagal hai, Darr and Veer Zaara. Irrelevant of the events that unfolded around Yash Chopra, watch this film, this has probably been the last of its kind, a 179 minute romantic film is not going to hit the screens in the near future. You will have to bear a few minutes to reach some moments that are worth the wait.

The part of the movie that was the best was the making of Jab Tak Hain Jaan which focussed on the director, althogh the whole theatre stood up to leave, no one could move until the screen had gone blank, probably a standing ovation is the least in regards to paying our tributes to a legendary director.